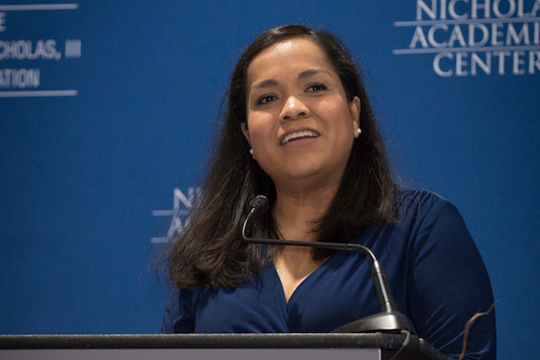 A simple philosophy can go a long way. “Tikkun olam,” a Hebrew phrase that literally translates to “world repair,” inspired now-retired Superior Court Judge and NAC Co-Founder, Jack K. Mandel, to dedicate his time and resources to help students in Santa Ana more than twenty years ago. Rosa Diaz, who was one of the first students in the early group known as the “Judge’s Kids,” found strength and inspiration in the Judge’s mentorship, and like the Judge, has committed her life to helping Santa Ana’s youth achieve success. As the NAC prepares to graduate its eighth class of NAC Scholars, raising the number of NAC alumni from 602 to 727 graduates, the Santa Ana Chamber of Commerce will recognize Rosa Diaz, the NAC’s Executive Director and former “Judge’s Kid,” as the “Small Non-Profit Leader of the Year” at the sixth annual Difference Makers Luncheon on Thursday, April 21, 2016. The purpose of the award is to “spotlight extraordinary people helping to build a better Santa Ana.”

In 2008, when Judge Mandel partnered with Dr. Henry T. Nicholas, III, Co-Founder, and former Co-Chairman, President and CEO of Broadcom (BRCM), the Judge called on former “Judge’s Kids” Rosa Diaz, Hugo Gutierrez, and Rocio Chavez to help build the Nicholas Academic Centers (NAC) and carry out the philosophy of “Tikkun olam.” Rosa, who previously worked as a mentor for group homes and as an After School Coordinator with THINK Together, believed in the mission set forth by Dr. Nicholas and Judge Mandel, to nurture the talents and intellect of Santa Ana youth, and to help them realize their potential to attend, succeed, and graduate from college. After all, the same mentorship helped her find a path to success years ago.

“My life was changed when my mentor, Judge Mandel, took an interest in my life,” Rosa notes, adding, “He pushed me to go to college and openly supported every crazy idea I had, like triple majoring in college or traveling to South Africa. His unwavering support made me feel like the world belonged to me, that I had tangible control of my future.” Rosa considers it her calling to give back to the community and mentor Santa Ana’s youth, like her mentor before her. Smiling, Rosa comments, “I am incredibly lucky to be in a position that sees so much positive change in this world, and helping the NAC grow has been the most rewarding experience of my life. I am just lucky.”

Like the entire NAC staff, Rosa does not come to work every day with the expectation that others will recognize her work. Instead, she works with youth because it makes her happy, and it reminds her that the Santa Ana community is “full of hopeful and bright young minds, that if given a chance, can and will change themselves, their family, and the community through the power of a college education.”

As an immediate example of the NAC Scholars’ potential, Class of 2016 NAC Scholar Judith Carrillo will also be one of fourteen students honored at the Difference Makers Luncheon. Judith will receive a Difference Makers Scholarship sponsored by C.J. Segerstrom & Sons from the Santa Ana Chamber of Commerce. Last year, two NAC Scholars, Amy Villarreal and Maria Garcia, were honored with the same scholarship.

If you would like more information about the Santa Ana Chamber of Commerce and the Difference Makers Luncheon, please visit their site HERE. If you are interested in attending the event, please visit HERE to reserve your seat.