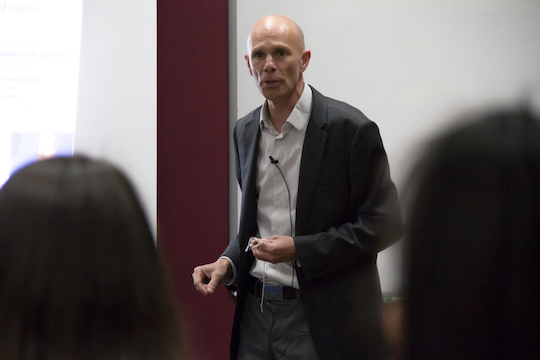 We all know that lions give birth to cubs, dogs to puppies, cats to kittens, and humans to babies. Most people realize that it is due to the biological instructions held in our DNA. What few people understand, however, are the biological occurrences in DNA and what happens to those sequences as we age. Dr. Marco Bisoffi, Associate Professor of Biochemistry and Molecular Biology/Biological Sciences at Chapman University, expanded on that topic during a Chapman Visiting Scholars Series lecture on March 12th in front of a group of NAC scholars.

Conduct a quick search in Google or Bing for “DNA,” and a familiar image will appear: the double helix, that when unwound, looks like a ladder. To better understand Dr. Bisoffi’s presentation and how DNA affects aging, it might help to know a thing or two about DNA. DNA, or Deoxyribonucleic acid, is made up of two sets of polynucleotides that are made of simpler units called nucleotides. This thread-like design is tightly packaged together and forms an X-shaped structure that we call chromosomes.

Looking deeper, Dr. Bisoffi focused on the region of repetitive sequences at each end of a chromosome that protects the end of that package from deterioration and from fusion with neighboring chromosomes; these end pieces are called telomeres. For simplification, imagine a telomere being like the small plastic end of a shoelace that prevents the threads that make up that shoelace from unraveling. As cells proliferate (replicate), the telomere, or end of the shoelace, gets shorter, weaker, and when it becomes too short (critical length), the cell is signaled to expire.

Dr. Bisoffi explained that scientists have discovered that cancer patients tend to have more of an enzyme called telomerase in their DNA. Telomerase plays a key role in cell replication, as it helps telomere ends close as DNA is being duplicated. Explaining this, Dr. Bisoffi asked scholars what they thought of this information. NAC scholar Jesus Hernandez contributed by asking Dr. Bisoffi about the real world application of this knowledge: “Knowing that telomere length is reflective of age, could we tell how old a person is based off blood samples collected from a crime scene?” Dr. Bisoffi responded, “We can’t differentiate age within a few years, but we can tell if the victim was old or young based off those samples.”

This lecture was very useful as some of the scholars in the presentation had just been accepted to attend Chapman University in the fall. Luis Anaya, a regular attendant of the lectures and one of the scholars who was accepted to attend the university, said “I really enjoyed this lecture because Dr. Bisoffi introduced us to a section of cancer research that isn’t normally heard in public.” Anaya continued by saying, “Because the lecture was in a small setting, it really gave me a feel for how the private college classroom environment would feel like at Chapman University.”

Dr. Daniele Struppa, Chapman University Chancellor, added, “We know how to send people to Mars. There are a lot of technical complications but there is no real major new science.” Struppa continued, “Cancer is a completely different story. We know a lot, and yet so little.” In Dr. Bisoffi’s words, “Knowledge is basically power. If you know something, the next question is, what can you do with it?”