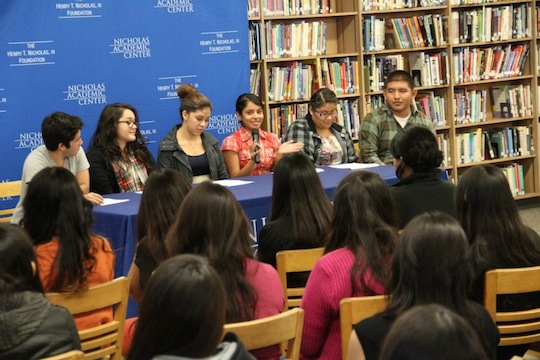 On Thursday, December 27, for the second consecutive year, a panel of Nicholas Academic Centers’ alumni now attending top colleges across the United States returned to the NAC to talk to more than 60 current students about their college experience. The alumni also gave tips and advice to help current NAC students better prepare for going to college.
This year’s panelists attend schools near and far, from Santa Ana College, Orange Coast College, Chapman University, and California State University, Fullerton here in Southern California, to the University of Notre Dame in South Bend, Indiana and Denison University in Granville, Ohio. Katrina Linden, a class of 2012 NAC alum and freshman at the University of Notre Dame, touched on the cultural implications of studying away from home. “Being in Santa Ana, you’re used to a certain type of person, and then going to college you’re in a totally new community [with] different people, different experiences, and you really have to learn how to communicate with those kinds of people and learn how people live. It’s completely different than what you’re used to.”
In addition to geographical challenges, panelists shared tips for not getting lost in the crowd in large classes. Maria Jacobo, a class of 2012 NAC alum and freshman at California State University, Fullerton, stated, “If you can’t talk to your professors [because of the large class size], at least be willing to go up to them for help. Don’t be scared.” Jessica Aguilar, a class of 2012 NAC alum and freshman at Denison University, a school that boasts smaller class sizes than CSUF, also stressed the importance of communicating with professors. “Definitely try to develop a relationship with your professors because they’ll be there for you, they’ll help you, they’ll do anything. They’re not trying to fail you; they’re trying to help you pass.”
Cesar Hernandez, a class of 2012 alum and freshman at Chapman University, shared what it is like to study alongside some of the brightest minds in the country. “It’s hard competing at that level because you’re competing against the whole United States, not just Santa Ana anymore. So, there are those people out there that are just way up here [working at a high level], and you have to try your best to be one of those people.” To help students stay focused and compete at the highest level, Reyna Salgado, a class of 2010 alum now studying at Orange Coast College, reminded students of the importance of time management. “Once you get [to college], there are a lot of distractions; you might lose track of what is important to you.” Alejandro Martinez, a class of 2012 alum now in his first year at Santa Ana College, encouraged students to keep an open mind and to try new subjects.
Immediately following the Alumni panel, all in attendance enjoyed a potluck, featuring a variety of foods prepared by students and their families.
Click HERE to watch a video of the event.
Jan 04adminNo Comments