Home / Academics / What the Letters on the Sweate ... 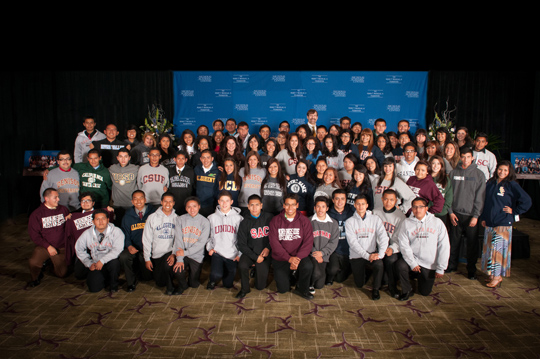 What the Letters on the Sweaters Really Say: A Look at the 4th Annual NAC Graduation Celebration

On Saturday, June 9, 2012, over 400 people gathered at the Westin South Coast Plaza in Costa Mesa to celebrate the accomplishments of the NAC’s 81 graduating seniors from the 2012 class. Friends, family, high school counselors & administrators, community leaders, and more shared an evening of great music, delicious food, and inspiring stories and speeches.
During the reception, the Santa Ana High School Mariachi Band treated attendees to music while the catering staff brought around a trio of pre-ceremony appetizers. The lobby featured an interactive display of pictures from past NAC events and statistics highlighting the successes of current NAC alums, including the growing number of NAC students served each year as well as the increasing number of graduates attending 4-year colleges across the United States. Guests could also familiarize themselves with the graduating class at one of two large screen TVs, each of which presented pictures and bios for this year’s NAC seniors.
After the ballroom doors opened and the guests were seated, the ceremony began with a short video featuring several NAC students who shared their experience with the centers. NAC juniors Marylinda Bustamante and Hector Valencia, the Master and Mistress of Ceremonies, officially began the celebration by introducing the first speaker of the evening, Dr. Henry T. Nicholas, III. Dr. Nicholas then took the stage and welcomed the crowd to the event. During his opening remarks, Dr. Nicholas commented on the $1.1 million earned by this year’s NAC seniors in grants and scholarships, and noted the significance of the NAC’s retention numbers: “Where the rubber meets the road is graduating from an institution of higher learning; it’s retention, and this is the statistic I am the most proud of. After four years of operation, our graduates have achieved a 97% retention rate. That compares to a national average of 77%.”
Following Dr. Nicholas, the “Judge”, Hon. Jack K. Mandel, addressed the crowd and reflected on the classes of NAC students who have continued to outperform the national average despite the odds, and he announced a recent decision from Chapman University to accept NAC student Ceasar Hernandez on a full scholarship, beginning in the fall semester. It is not unusual for NAC students to earn such awards, but this marks the first time a NAC junior has been admitted to college before entering his senior year of high school. Ceasar earned the necessary credits ahead of schedule while attending Middle College High School in Santa Ana.
Other highlights from the event include guest speakers Dr. Thelma Melendez de Santa Ana, SAUSD Superintendent, Dr. Donald Cardinal, Dean of the College of Educational Studies at Chapman University, and Miguel Pulido, Mayor of the City of Santa Ana in his fourth NAC graduation attendance. Mayor Pulido commended the Judge for dedicating himself to the students of the Santa Ana Unified School District, and he noted that the Judge coming together with Dr. Nicholas formed a dynamic duo, saying, “They just have reached out and made such a difference, and I tell you for me it’s been an inspiration because when I look at my background, I started like many of you.”
After dinner, NAC students Carlos Brito, Jackie Fernandez, Uriel Macedonio, and Katherine Mitchell reflected on their experiences with the NAC, thanking the NAC for helping them work through personal, academic, and financial struggles. They were followed by Hugo Gutierrez, the NAC’s Acting Executive Director, who reviewed some of the NAC’s statistics; however, he personalized the numbers and connected them to the people they represented, using specific examples to illustrate their significance. One example included Mariana Hernandez, a Class of 2010 alum, who now attends Georgetown University and will spend her summer interning for the office of Congresswoman Loretta Sanchez in Washington D.C. while also coordinating a transition program for incoming freshmen on campus.
Katrina Linden, who will attend the University of Notre Dame in the fall, spoke as the Senior Class Student Speaker, and said that utilizing the resources made available at the NAC made getting through school “a hundred times easier,” especially during difficult personal times. She also credited the NAC for introducing her to new friends, including some of her closest friends.
For the main event, Dr. Nicholas, the Judge, and Hugo Gutierrez presented the graduating seniors with certificates and sweaters from the schools they will be attending in the fall. Each student took the stage, one at a time, to receive his or her awards. When the ceremony ended, all in attendance gave a standing ovation to this year’s graduates.
Here is the list of schools this year’s NAC graduates will attend in the fall (in alphabetical order):
Allegheny College
Brandeis University
California State University, Fullerton
California State Polytechnic University, Pomona
Concordia University
Connecticut College
Denison University
Golden West College
Humboldt State University
Irvine Valley College
Jamestown College
Morningside College
Mount Holyoke College
Orange Coast College
Pomona College
San Francisco State University
Santa Ana College
Santiago Canyon College
Tufts University
Union College
University of California, Davis
University of California, Irvine
University of California, Los Angeles
University of California, Santa Barbara
University of California, Santa Cruz
University of Notre Dame
University of Southern California
Whittier College
Jun 12adminNo Comments